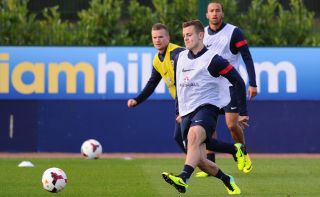 The Arsenal midfielder was criticised by sections of the media and his club manager Arsene Wenger after being pictured outside a nightclub smoking, although he followed that up by scoring in his side's 1-1 draw at West Brom last weekend.

Wilshere then sparked further controversy in the week by claiming that only English players should represent England in response to questioning over Manchester United youngster Adnan Januzaj's hypothetical availability.

Those comments resulted in a backlash with the 21-year-old coming under fire from the media and also other sportsmen, such as South Africa-born England cricketer Kevin Pietersen.

However, Hodgson is not concerned about his player's frame of mind going into Friday's crucial FIFA World Cup qualifier against Montenegro.

"It hasn't affected Jack," Hodgson said. "I think he just shrugs it off.

"I think we expect so much from Jack and that can be a slight problem for him.

"When someone comes on to the scene with incredible talent you expect so much from them and every time they fall below those standards alarm bells start ringing.

"But he's put behind him the unfortunate furore over his quotes and it's not affected him one bit on the field.

"I think England will get a lot out of him in these next two games and for a long, long time to come."

England take on Montenegro at Wembley before hosting Poland on Tuesday with only two wins from their final qualification fixtures enough to guarantee their spot at Brazil 2014.