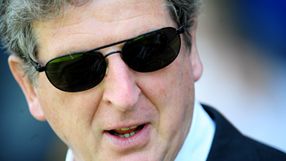 The FA said the vastly-experienced Hodgson, 64, was the only candidate they had approached about replacing Italian Capello who quit in February following a row over deposed England captain John Terry.

Tottenham Hotspur manager Harry Redknapp had been widely considered to be the strong favourite to get the job. Redknapp has repeatedly said he is totally committed to Spurs and would not talk about England unless he was offered the position.

"West Bromwich Albion have today granted permission for the FA to speak with Roy Hodgson regarding the position of England manager," the FA said in a statement.

FA chairman David Bernstein added: "I'm grateful to [WBA chairman] Jeremy [Peace] and all at West Bromwich Albion for their co-operation in allowing us to approach Roy, who I have since spoken with.

"Roy is the only manager we have approached and we remain on course to make an appointment within the timescale we set-out soon after Fabio Capello's departure.

"Further conversations will now take place with Roy and my Club England colleagues before any further announcements can be made."

With Euro 2012 little more than a month away, England are still without a full-time manager. Under-21 coach Stuart Pearce is acting as caretaker manager for the senior squad who next face a friendly against Norway in Oslo on May 26.

England meet Belgium in a friendly on June 2 before opening their Euro 2012 campaign against France in Donetsk on June 11. Sweden and co-hosts Ukraine are also in England's group.

Hodgson has been in charge of West Brom since February last year after a disappointing spell in charge of Liverpool where he lasted just six months after a poor run of results.

He replaced Rafa Benitez at Liverpool after a fairytale season with Fulham in 2009-10, guiding the London club to the Europa League final.

Hodgson, who also managed Blackburn Rovers in the Premier League, has plenty of experience outside England.

As well as spells in club football in Denmark, Norway and Sweden, where he won five league titles with Malmo, multi-lingual Hodgson also managed Switzerland and qualified them for Euro 1996.

He has also been national team coach of Finland and the United Arab Emirates and had a spell with Inter Milan from 1995-97, taking the Italians to third in Serie A and to the UEFA Cup final.

West Brom said they wanted Hodgson to remain in charge at The Hawthorns after he guided the Midlands side to mid-table safety this season.

"Roy is a proud Englishman and we can understand why he wants to speak to the FA about this highly prestigious managerial position," Peace told the club's website.

"However, we have emphasised to Roy how much we would like him to remain as our head coach and continue his major contribution to our project at The Hawthorns as we look to establish ourselves as a Premier League club."