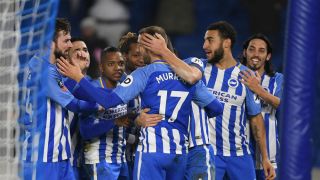 Roy Hodgson gave the video assistant referee (VAR) system the thumbs-up despite it allowing a goal that knocked his Crystal Palace side out of the FA Cup.

The much-discussed technology made its debut in English football on Monday and Glenn Murray's late goal for Brighton and Hove Albion, securing a 2-1 third-round victory against rivals Palace, was allowed to stand despite suspicions of handball.

A VAR review was not initiated by Palace but referee Andre Mariner discussed the incident with video official Neil Swarbrick and the goal was deemed legitimate without recourse to the pitch-side monitor.

"It would have been very harsh," said former England boss Hodgson when discussing whether Murray's effort where he deflected Uwe Hunemeier's header should be have been disallowed.

"There's still a slight thought it might just have brushed off his arm into the goal, but if it'd been my player scoring that goal, I'd have been very upset if it had been disallowed for handball.

"It was a genuine goal. And the referee was helped by the fact he had Swarbrick in the VAR studio making a judgement that'd help him out - so I have no complaints."

Job done Onto the next round in the !! Love that winning feeling January 8, 2018

"I couldn't see it that clearly. Obviously I saw it go in but I didn't know what the circumstances were," said the Brighton manager.

"I knew Hunemeier rose at the far post and did really well, so no I couldn't see it and had to wait until we came in - but obviously it's been very clear that it didn't need VAR."

The next trial of VAR in England will take place this week, when Chelsea face Arsenal in the semi-finals of the EFL Cup.