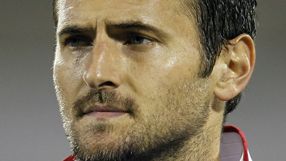 Hoffenheim defender Josip Simunic has been banned from team training and will train on his own after the club openly questioned the 33-year-old's commitment this season, coach Marco Pezzaiuoli said.

"Josip must first recover from his muscle injury but we also told him that we are not 100 percent satisfied with his attitude," said the coach on the club website on Friday.

The Croatian, who has started in only seven league games this season, will not be in the squad for the game against bottom-placed Borussia Moenchengladbach on Saturday because of his thigh muscle injury, the club said.

Werder Bremen will probably take the field without midfielder Aaron Hunt, who may have sustained a minor muscle tear in training and missed Thursday's practice.

"It could take a little longer," said coach Thomas Schaaf when asked whether Hunt would be fit for their match at Freiburg on Sunday.

Relegation-threatened VfB Stuttgart could be without Hungarian midfielder Tamas Hajnal and striker Cacau when they host Schalke 04.

"With Cacau and his adductor problems it does not look good for Saturday," coach Bruno Labbadia told reporters.

Labbadia, however, can expect playmaker Pavel Pogrebnyak back in the squad after recovering from a broken rib.