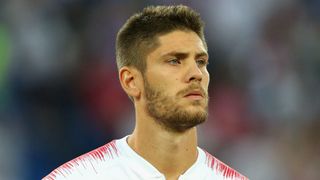 Hoffenheim's sporting director Alexander Rosen has suggested that Croatia striker Andrej Kramaric could be allowed to leave if €50million is offered for his services.

Kramaric, who played an hour of Croatia's 2-0 World Cup Group D victory over Nigeria, has been widely linked with a return to the Premier League to join Newcastle United - although Bayern Munich are also reported to be chasing his services.

Formerly of Leicester City, Kramaric was in fine form for Hoffenheim during the 2017-18 Bundesliga season, scoring 13 goals, and his services resulted in interest from Italy during the January transfer window.

Hoffenheim, who earned a spot in the group stages of the Champions League next season, are prepared for bids for their star striker and a potential price tag has now been revealed.

"I never rule out anything, that's not in our business," Rosen told TZ.

"We had an offer of €30m for Andrej from Italy during the winter break. That was not an option for us. But what happens if €50m is offered I cannot say."

Capped 32 times by Croatia, the 27-year-old spoke about his future before the World Cup in Russia and refused to be dragged into speculation.

"I saw what the media have said [about Bayern links] but take it easy, there is plenty of time," he told Goal.

"My priority is the World Cup now. There is plenty of time to discuss a potential transfer."

Croatia face Argentina on Thursday, where victory can seal their spot in the knockout stages, before tackling Iceland in their final group match.