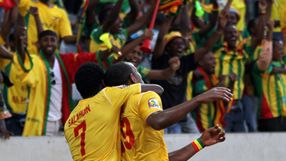 The Ethiopians' wildly enthusiastic and noisy fans threw bottles, vuvuzelas and other missiles on to the pitch in protest at the red card handed to keeper Jemal Tassew.

He was carried off on a stretcher after a wild flying kick and lunge at Zambia's Chisamba Lungu in the 32nd minute which evoked memories of the infamous foul West Germany goalkeeper Harald Schumacher committed on France's Patrick Battiston in the 1982 World Cup semi-final.

Gabon referee Otogo Castane allowed Tassew to be treated on the pitch for 11 minutes before showing him the red card as he was carried off.

As that was going on, a jet fighter buzzed over the stadium, adding to the general mayhem and cacophony of noise as the Ethiopian fans cheered on their side.

Ethiopia striker Saladin Seid had already missed an open goal and a penalty and they held on for a point following skipper Adane Girma's equaliser to cancel out Collins Mbesuma's goal on the stroke of half-time, lashing in a half-volley from the edge of the box after a neat head-on from Isaac Chansa.

"The goalkeeper is there to defend," Bishaw told reporters. "I do not think it was a sending-off, which is why the fans were so angry.

"They were not angry with the Ethiopian team, but with the referee."

Renard, who fielded 10 of the side that won the title in Gabon last year, disagreed.

"I have looked at the replay and of course it was a sending-off. He had to go. The rules are quite clear, you cannot fly into an opponent like that."

However, the 44-year-old Frenchman did praise the Ethiopians.

"I congratulate the Ethiopian team they played very well and it was not a surprise to me," he said.

"I said a lot before the game that we had to be careful. We did not play as well as we could today and they punished us and I have to thank our goalkeeper Kennedy [Mweene] because we would have been in more trouble without him. It was a bad result today and we got what we deserved."

Apart from Tassew's rash attack and some panicky moments in defence, Ethiopia played neat football with Minyahile Teshone and Asrat Megersa providing good balls for Seid to feed on up front.

He almost scored after 17 minutes and had an even better chance after Lungu fouled him but he shot weakly from the penalty spot and Mweene pushed the ball away.

Zambia did created plenty of chances with Chansa and Chris Katongo doing well in midfield, but they were frustrated by wayward shooting apart from Mbusema's goal, scored by the only Zambia player not in the starting line-up in last year's final.