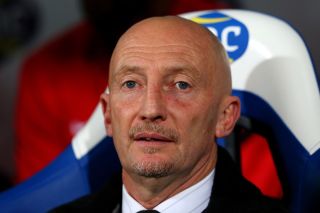 Holloway guided the club to the Premier League via the play-offs last season, with a Kevin Phillips penalty securing a 1-0 victory over Watford at Wembley as Palace returned to the top flight for the first time since 2005.

But Holloway's 11-month tenure ended on Wednesday after he parted ways with Palace, with the side picking up just one Premier League victory this season in a 3-1 triumph over bottom club Sunderland.

Palace could now turn to former Stoke City manager Pulis to try and guide the club away from the relegation zone after chairman Steve Parish revealed he will approach the Welshman.

And Holloway insists he harbours no ill-feeling towards Palace and hopes the club can preserve their Premier League status.

"The fans deserve a fresh start and a fresh chance and good luck to them."

Holloway feels his biggest regret was making too many changes in the playing personnel at Palace over the close-season.

The London club underwent an overhaul of the first-team squad with the likes of Cameron Jerome, Jimmy Kebe and Marouane Chamakh all joining in the transfer window.

And Holloway admits he should have shown more faith in the side that achieved promotion.

"What I should have done is reward the squad that were with me and not try to change too quickly too fast," he continued.

"Steve Parish was part of that as well as me, but I wish him all the best now.

"To take the emotion out of it is very difficult. Football is what it is. If you're at the bottom of the Premier League, the pressure is on the board to do something.

"They have to realise they haven't been that far off from getting a half-decent result and once they get one they will build."