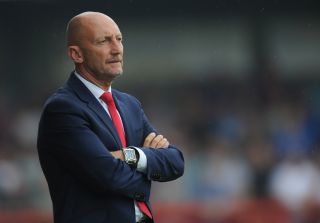 Palace's poor start to the Premier League season – they have won just one of their first eight matches – continued at Selhurst Park despite Adrian Mariappa's goal giving them an early lead.

Stunning strikes from Pajtim Kasami and Steve Sidwell gave Fulham the lead before the break, before Dimitar Berbatov and Philippe Senderos wrapped up the rout in the second half.

The result leaves Palace five points adrift of safety already and Holloway – who signed 16 players in the close-season, more than any other Premier League club – has publicly doubted his decision to sign so many.

Holloway could not fit all of his new arrivals in his 25-man squad for the season and after a meeting with co-chairman Steve Parish following the defeat, said he was disappointed at the commitment of his players.

"We have lost five games since we announced the 25 (man-squad) and there is something wrong there," Holloway said.

"I don't think we have got the same spirit. Maybe we changed too many. But that is the squad we have until January so they better buck up and stick together."

Holloway is expected to meet again with the club on Tuesday as doubt rages over his future.

Palace host table-toppers Arsenal in their next Premier League fixture on Saturday.