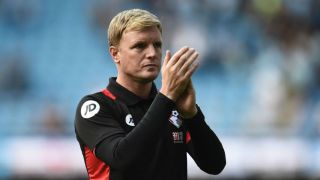 Eddie Howe has described managing England as the "ultimate job" but distanced himself from replacing Sam Allardyce, insisting he is fully committed to Bournemouth.

The 38-year-old has been one of the names linked to the national team after Allardyce's 67-day tenure was ended by mutual agreement on Tuesday.

However, Howe stressed that nothing has changed and has full focus on his duties with Bournemouth ahead of their Premier League match away to Watford on Saturday.

"Nothing has changed from the summer. I've said in many interviews that the England job is the ultimate job, but I've signed players here and pledged a future to them.

"I'm not interested in the job now. You can never predict what will happen in the future.

"This is all hypothetically speaking - I couldn't turn my back on this club and the loyalty shown to me. I have to show it in return. I love the job and have a lot more work to do here first.

"My aim is to lead this club forward in the Premier League and improve on last season - that's my only thought."

Allardyce's exit came after the Daily Telegraph published footage claiming to be from a meeting in August between a pair of undercover reporters and Allardyce.

In the footage, Allardyce allegedly told two men purporting to be from a Far East investment firm how they might "get around" FA regulations concerning the transfers of players under third-party ownership.

Howe added: "It's not been a great week for football. It's not ideal that the England situation has come up again, but I won't get distracted.

"We had some very good games in the Championship against Watford – their style against ours – and I expect the same on Saturday."