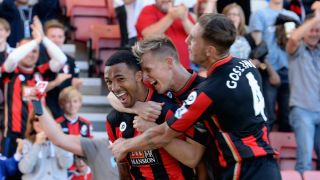 AFC Bournemouth manager Eddie Howe has backed striker Callum Wilson for an England call-up if he can maintain his impressive start to life in the Premier League.

Wilson has hit the ground running in the 2015-16 campaign with five goals in the opening six matches, including a hat-trick against West Ham last month.

His latest strike came in Saturday's comfortable 2-0 win over Sunderland and Howe believes the 23-year-old can force his way into Roy Hodgson's squad as he begins his preparations for Euro 2016.

"It is not for me to decide. I would certainly push him and ask for him to be considered due to the start he has had and throughout the whole of last season," said the Bournemouth boss.

"He has all the attributes a modern-day striker needs. He is very quick and did really well for the first goal in showing strength and ability to roll the defender in a tight situation. It was a superb finish and he is full of confidence at the moment.

"It is great we are playing at this level and our players are being appreciated and talked about. I would like nothing more than for Callum to go on to make England appearances.

"His potential is limitless. He is strong, quick and a good finisher. One of the features of his performance against Sunderland was his hold-up play. His general link play was as good as I have seen it.

"He is developing all aspects of his game all the time. He is still young and needs to keep level headed and keep doing the right things. If he does then only good things will happen."