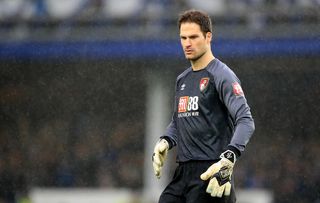 Bournemouth manager Eddie Howe insists he has not fallen out with goalkeeper Asmir Begovic.

The Bosnia-Herzegovina goalkeeper was a surprise omission from the squad for last weekend’s impressive 1-0 home win over Tottenham, with 19-year-old Irishman Mark Travers making his debut.

Howe revealed Begovic will not feature in Sunday’s final Premier League game of the season at Crystal Palace, but insisted he had merely handed the 31-year-old an extra week off.

The Cherries boss refused to deny Begovic could leave Bournemouth this summer, but was adamant he remains on good terms with the former Chelsea star.

“Some of the things that have come out this week have been totally inaccurate,” said Howe.

“We decided to play Mark (Travers) and rest Asmir (against Spurs). He’s been given the final week of the season off to spend some extended time with his family.

“But nothing malicious or any stories to read into that, to say that he’s played his last game for Bournemouth. Who knows what the summer brings for him or for us, but there’s been no fall-out and he’s still a top professional.”

When asked if Bournemouth will sign a goalkeeper this summer, Howe said: “Who knows? It’s a difficult one for us to reflect on at the moment.

“We’ll get the game out of the way first then sit down and make our plans.”

Travers became the first teenage goalkeeper since Joe Hart in 2006 to start a Premier League match as the Cherries edged out Spurs at Dean Court last weekend.

Now the 19-year-old could retain his place for Bournemouth’s trip to Selhurst Park, with boss Howe backing the youngster to shine again if called upon.

“We decided to play Mark at the weekend and we were delighted with his performance,” said Howe.

“He’s a very level-headed lad so we haven’t really had to say too much to him this week.”

Bournemouth’s resources will be stretched again for their south London encounter, with David Brooks, Dan Gosling and Dominic Solanke all still sidelined.

“Dan Gosling and Dom Solanke are also missing. Those lads who missed out last week won’t make it for this weekend.”