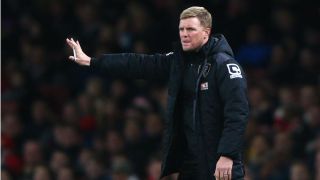 Eddie Howe felt AFC Bournemouth paid the price for their profligacy in front of goal after they slipped to a 3-1 defeat at home to West Ham.

The hosts took the lead after 17 minutes at the Vitality Stadium, Harry Arter scoring his first Premier League goal with a long-range strike that deceived West Ham goalkeeper Adrian.

However, a plethora of chances went begging for Bournemouth to extend their lead before the break, including two golden opportunities for debutant Benik Afobe, a big-money arrival from Wolves.

The misses proved costly as West Ham scored three unanswered goals in the second half, two of which were stunning free-kicks from Dimitri Payet and Enner Valencia.

"I don't think we were at our best levels today, so it's disappointing for us. We had enough chances in the first half," Howe said.

"Both of West Ham's free-kicks were world class. There was very little that we could have done about either of them.

"I thought they pressed us well, but we didn't handle that pressure as well as we usually do.

"We give West Ham credit but we have a look at ourselves first, which we will do with the post-match analysis."

Despite the result, Howe was quick to praise the performance of Afobe.

The striker, signed for a reported £10million at the start of the January transfer window, was one of three new faces to feature for Bournemouth, though fellow new recruits Juan Iturbe and Lewis Grabban were only introduced as substitutes in the second half.

"I thought Afobe did very well for us tonight. With very little training he worked hard and held the ball up for us," Howe added.