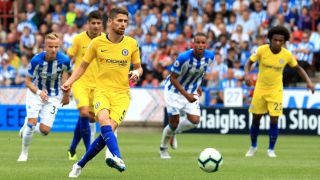 Jorginho marked his Premier League debut with a goal as Chelsea kicked off their campaign with a comfortable 3-0 victory over Huddersfield Town at the John Smith's Stadium.

Italy international Jorginho passed home a fearless penalty in the 45th minute as Maurizio Sarri earned his first competitive win at the helm after his team went down to Manchester City in the Community Shield last weekend, while fellow debutant and the world's most expensive goalkeeper Kepa Arrizabalaga started with a clean sheet.

Jorginho, who followed Sarri's path from Napoli for a reported £50million, added to the opener from World Cup-winning midfielder N'Golo Kante, who returned as one of three changes to the team that lost to City.

Huddersfield struggled to test the Kepa his first outing since joining from Athletic Bilbao for £72m as Chelsea dominated the second period, with Pedro adding the gloss after a brilliant counter-attack launched by substitute Eden Hazard.

Chelsea were lacking dynamism and conviction as Huddersfield sat deep and proved difficult to break down, but Pedro's driving run and pass out to Willian enabled the Brazilian to pick out Kante, who scuffed a left-footed volley into the ground and inside the far post in the 34th minute.

Huddersfield were a persistent threat from crosses into the box and they went close to an equaliser when Steve Mounie headed Mathias Jorgensen's flick-on against the inside of the upright.

But Chelsea again punctuated a strong spell for the hosts with a goal, Jorginho sitting debutant Ben Hamer down with a skip in his run-up for an incredibly cool spot-kick after Christopher Schindler caught Marcos Alonso at the end of a neat move from the Blues.

The Blues were the sole aggressors in the second half and, after Hamer parried a header from Antonio Rudiger behind, Alonso sent an acrobatic effort against the crossbar in the 58th minute.

Hazard came on for Willian for just his second outing since the World Cup and poked a pass through the legs of Terence Kongolo for Pedro to lift Chelsea's third beyond Hamer and round off a routine win.

What it means: Chelsea getting there ... slowly

More flashes of what Chelsea fans can expect from 'Sarri-ball' would have been anticipated and they received a brilliant example when Ross Barkley flicked Jorginho's pass into the run of Alonso, who won the penalty from Schindler. After looking aimless for long periods in the first half they were much improved in the second, with more Hazard involvement likely to take them up a gear.

Pat on the back: Jorginho gets Blues ticking

After a frustrating debut against City, Jorginho produced a fine display at the base of Chelsea's midfield. The Italy international barely misplaced a pass and orchestrated the visitors' approach by keeping himself open and barking out orders. The return of the industrious Kante no doubt helped him focus on the areas he excels in.

A persistent and troublesome back injury stymied a strong start to Alvaro Morata's Chelsea career, but he showed no sign of turning around the form that has seen him net just once in the Premier League this year. In Sarri's 4-3-3 he struggles to link up with his team-mates and often cuts an isolated figure in the final third. He will have World Cup-winning team-mate Olivier Giroud breathing down his neck if he does not step things up quickly.

Chelsea welcome Arsenal to Stamford Bridge in the standout Premier League fixture of next weekend, while things do not get any easier for Huddersfield - they head to reigning champions City.