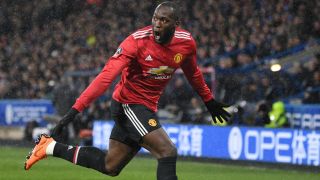 A double from from Romelu Lukaku secured a 2-0 FA Cup fifth-round win for Manchester United against Huddersfield Town on Saturday, despite another controversial moment involving VAR.

The Belgium international struck early in each half to secure a quarter-final spot for Jose Mourinho's side and end their run of back-to-back away defeats.

Victory came despite Juan Mata seeing a first-half strike disallowed after a VAR referral, with the contentious decision prompting more debate about the merits of video technology.

United, who were without the ill Paul Pogba or goalkeeper David de Gea, took the lead three minutes in when Mata's pass was finished in style by Lukaku.

Huddersfield, winners in the home Premier League game against United in October, were largely the better team in the first half but could not trouble Sergio Romero unduly, and they were given a boost when Mata's goal was ruled out for offside after a VAR consultation.

United put the game beyond Huddersfield's control 10 minutes after the restart, though, as Lukaku struck again to seal safe passage to the last eight and give his side a morale boost ahead of Wednesday's Champions League trip to Sevilla.

Huddersfield started the better of the teams, enjoying 67 per cent of the possession in the opening quarter of an hour, but it was United who made the most of the first early chance.

Mata played a fine throughball to Lukaku, who charged into the penalty area before cutting back on his right foot and firing low past the wrong-footed goalkeeper Jonas Lossl.

Huddersfield were targeting the United left to good effect and Tom Ince came close to equalising when Florent Hadergjonaj crossed from that side, though he just failed to get clean contact on the ball as he slid to meet it.

United soaked up the pressure well and thought they had snatched a second goal just before half-time, when Mata rounded Lossl and finished after being picked out by Ashley Young, but the goal was disallowed after a VAR referral judged him offside by virtue of his knee.

The home crowd were buoyed by the decision and were firmly behind Huddersfield as they kept up their pressure early in the second half, but another slick United counter-attack made it two and sapped the fans' energy.

16 - Alexis Sanchez has been directly involved in 16 goals in 16 appearances in the FA Cup (eight goals and eight assists). Magic. February 17, 2018

Lukaku played the ball to Alexis Sanchez and raced onto the Chile international's fine return pass, before striding into the area and slotting past Lossl at his right-hand post.

As well as quietening the home support, it was a goal that seemed to relax Mourinho's men, who eased through the closing stages with minimal fuss to seal their place in the quarter-final draw.

And United even managed to hand Eric Bailly a first appearance since November after the centre-back came off the substitutes' bench in the final moments to mark his return from injury.