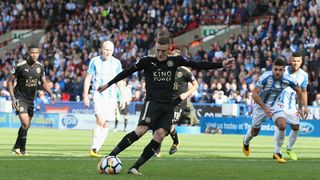 Jamie Vardy's penalty cancelled out a goal on his first Premier League start from Laurent Depoitre as Leicester City earned a battling 1-1 draw at Huddersfield Town.

Huddersfield had edged a first half that produced few moments of quality at the John Smith's Stadium and the match burst into life shortly after the break as Depoitre – who had made just one league substitute appearance this term – calmly slotted in a 46th-minute opener after outmuscling Harry Maguire.

But it proved a short-lived lead as four minutes later Vardy netted from the spot for the second consecutive week after Andy King was crudely felled by Chris Lowe.

Huddersfield looked the most likely to grab a winner thereafter and will feel aggrieved that Elias Kachunga saw a goal ruled out just after the hour, with replays suggesting the forward was perhaps marginally offside.

Leicester almost stole the points themselves, but Vardy failed to connect with Riyad Mahrez's cross with the goal unguarded.

A point leaves Huddersfield in fifth after five matches, while Leicester – who had lost back-to-back games to Manchester United and Chelsea – are 14th.

Huddersfield were fast out of the traps and Depoitre, named up front in one of three changes, met Tom Ince's cross with a glancing header straight at Kasper Schmeichel.

Lowe then sent a teasing ball across the face of goal that evaded everybody and the full-back also delivered a deep cross from the left that Maguire did well to shield to safety.

Leicester had offered little and a Vardy left-foot snap-shot that flew wide shortly before the break was the best they had to show for a lacklustre first half.

The match came alive after the restart.

First, Depoitre showed superb strength to shrug off the attention of Maguire 30 yards from goal to collect Abdelhamid Sabiri's throughball and race into the area before coolly slotting past Schmeichel.

But the lead didn't last long. Lowe chopped down a surging King on the right of the box and Vardy smashed his penalty to the left of Jonas Lossl.

Schmeichel made a smart stop to tip Zanka's drive over the top as Huddersfield sought to quickly regain the lead.

Shortly after, Kachunga seemingly got a slight touch on a Zanka effort that nestled in the bottom-right corner, with the linesman judging he was offside.

Leicester should have made the most of that reprieve when Mahrez showed quick feet in the area and lashed a low ball across the face of goal from the right that Vardy failed to touch home at the back post.

As the clock wound down, Vardy failed to keep the ball in play after rounding Lossl before Demarai Gray felt he should have had a last-minute penalty when he went to ground following a race with Zanka.