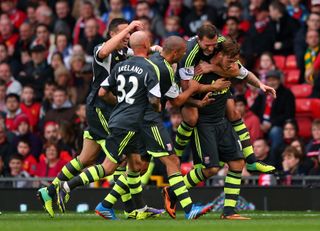 The Austrian was in supreme form at Old Trafford, curling home an excellent free-kick as Hughes' side went in at half-time 2-1 up.

However, having suffered from illness prior to the game, the former Werder Bremen attacker was unable to maintain his performance levels.

"They had the vast majority of the play in the second half," Hughes explained.

"We lost the ability to take the fight to them in the second half when Marko Arnautovic went off. So that affected us. Even so I didn't think they were creating a great deal.

"He was ill unfortunately; just before the game we were aware he might not complete the game.

"At half-time we thought he might have to come off but he wanted to continue. Unfortunately he could only last 10, 15 minutes."

Arnautovic's goal was his first for Stoke in his seventh outing since moving to the Britannia Stadium.