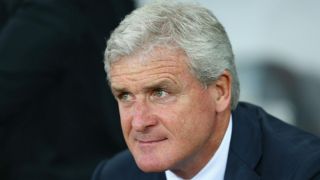 Goals from Troy Deeney and Almen Abdi either side of half time were enough to secure an impressive win for Watford and condemn Hughes to defeat on his 100th game in charge of the Britannia Stadium club.

While full of praise for Watford's performance, Hughes insists his side are focused on returning to winning ways on Tuesday when they take on an out-of-form Chelsea.

"I think Watford have been doing well," he told reporters after the game.

"We talked about their threat and their energy and their good defensive work because they don't concede too many goals and we've seen first-hand today why they don't.

"They're disciplined, athletic at the back and can get round the pitch.

"We didn't have enough on the pitch to really affect that and that doesn't happen very often here [at the Britannia] and I don't anticipate that it will happen in the future.

"It wasn't a performance that I recognised. The good thing is that we've got a big game on Tuesday and that's the perfect game for us because we can get back on track."

Stoke were dealt an early blow inside 10 minutes when Geoff Cameron limped off, but Hughes insists his side cannot use injuries as an excuse, before hinting that Ryan Shawcross could return in midweek.

He added: "I think it's fair to say that probably disrupted us but we can't hide behind that, there were good players on the pitch and they should have done better.

"Ryan was in my thoughts for Tuesday anyway so that doesn't change my thinking."