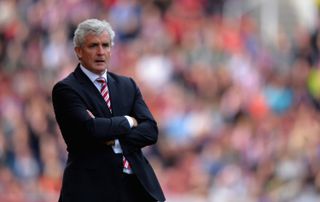 According to Hughes, who saw his side win 2-1 against Crystal Palace at the Britannia Stadium on Saturday, the club are interested in making further signings.

Stoke have secured Marc Muniesa and Erik Pieters since Hughes arrived at the club, with Juan Agudelo set to arrive in January, but the Welshman has called for patience with regard to more additions.

"We’ve got a number of things that we’re pursuing (with regards transfers)," he said.

"We’re still in the mix for a number of players and if we can bring them to the club I think that will help us. But you’ve got to be patient."

Goalkeeper Asmir Begovic has been in impressive form so far this season with the Bosnia-Herzegovina international having been linked with a move to Manchester United.

However, Hughes is determined to keep the 26-year-old at the club, despite having the experienced Thomas Sorensen and highly rated Jack Butland in place to fill in.

"Asmir was excellent , there’s no intention of us allowing him to leave," Hughes said after his side's win over Palace.

"He’s a big part of our team. The intention is to keep players here and not allow them to leave, so Asmir comes into that bracket certainly."