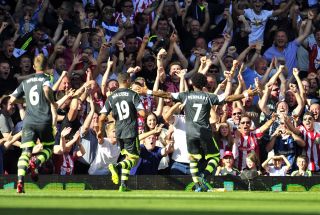 The 30-year-old winger was released by Stoke at the end of last season, but Hughes saw fit to bring him back to the Britannia Stadium after replacing Tony Pulis as manager.

And Pennant repaid the faith perfectly as he came off the bench to strike the decisive goal with a free-kick in the 82nd minute as Stoke climbed to fifth in the table, and afterwards Hughes was full of praise for the winger.

"It was a great finish from Jermaine," the Welshman said. "He's been excellent since I've come to the club and I've always admired his talent.

"He's had his own problems and when I came in to the job there was a real possibility that he'd be leaving the club. I couldn't allow that to happen.

"I didn't want the prospect of him turning up at Stoke in a different shirt. I wanted to work with him and see what he was like as an individual and he hasn't disappointed me."

Hughes also highlighted Pennant's commitment in training as proving vital in his ability to step up for his side when required.

"You don't score like he did today without extra work on the training ground," he added.

"Maybe in the past people have judged him without the opportunity to show what he can do. He's let himself down and he'll admit to that but he's enjoying it now and I'm really pleased for him.

"When he's around the box for free-kicks, he's probably the best we've got."