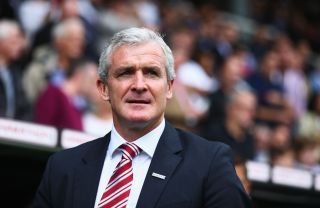 The Britannia Stadium outfit are on a five-match winless run in the top-flight, and could only muster a 0-0 draw at home to West Brom in their previous outing.

But they face a United side that have won just once in four Premier League games at Old Trafford this term, having been denied three points by Southampton last Saturday thanks to Adam Lallana's late leveller.

Ex-United player Hughes believes his team have performed well on the road this season, and he is looking for his team to inflict further damage on David Moyes' team.

"But sooner or later that has to change. If we can do what we know we can do, and take our chances, and hope for Asmir (Begovic, Stoke's keeper) to have another good day then it is a game we can win.

"We have played better away from home than we have at home this season, and we want that to continue at the weekend.

"There are areas for us to exploit, and if we can do that and restrict them at the other end, I am sure that we can get a result that would satisfy everybody connected to the club.

"We will go there and be positive. West Brom and Southampton have gone there and caused problems, and given the way we are playing away from home I fully expect us to worry them.

"You can't go to Old Trafford and be apprehensive, you have to go there and give it a real go - and that is what we will do."

Stoke's recent run has seen them slide to 16th in the table, and Hughes says he is still searching for his best attacking line-up as he looks to guide Stoke up the division.

"We have a lot of different options up top," the Welshman continued.

"We need to find that one combination which will be able to carry us through the season. We have tried Kenwyne (Jones), we have tried Crouchy (Peter Crouch) and we have looked at Marko (Arnautovic) up there too.

"We need to get the right balance and the right combination. I think we are close to finding the right one."