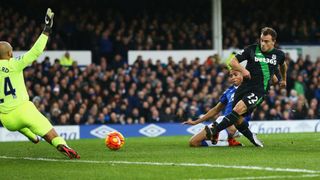 The Switzerland international caught the eye with a sublime performance in Monday's 4-3 Premier League win at Goodison Park, scoring twice - although there was some debate as to whether he meant the second.

Shaqiri gifted Stoke an early lead with his first goal for the club since his pre-season transfer from Inter, before doubling his personal tally when he stretched out his right boot to divert the ball over goalkeeper Tim Howard.

It was arguably his most influential display in a Stoke shirt, and Hughes expects him to push on from here.

"It takes time to understand what it is required at Premier League level. It doesn't matter what level you have played at before, the Premier League is a big ask," Hughes told BBC Sport.

"The only thing lacking up until today for Shaqiri was goals. Performances had been fine, but now he has added goals.

"He has that quality. It's his first mark in terms of goals and I'm sure there will be more to come."

Monday's win came just two days after Stoke's 2-0 victory over Manchester United and Hughes was delighted to see his side continue their momentum - although they did it the hard way after Romelu Lukaku levelled twice and then Gerard Deulofeu put Everton ahead with 19 minutes left.

Joselu made it 3-3 before Marko Arnautovic scored from the penalty spot in injury time, and Hughes added on Sky Sports: "It was a great game, it ebbed and flowed and it was a game of chances.

"Towards the end there were a few tired minds and that's when mistakes are made.

"It was important that we backed up the win against United and we did that. We'd got into a winning position and then we lost the lead and we could have been disappointed with that but we weren't’t to be denied.

Arnautovic won the game after being fouled inside the area by John Stones and Hughes felt referee Mark Clattenburg had got the penalty decision right.

"I don’t think the lad [Stones] got any contact on the ball, that's the debate," he continued. "If he did get the ball it was the faintest of touches, but he certainly made more contact with Arnautovic."

Shaqiri, meanwhile, was delighted to have opened his account for Stoke.

When asked about his second, which sparked some debate on social media as to whether he was intending a cross, he told reporters: "It's a beautiful goal and an important goal for the team. The ball was good and deep from Bojan and the finish was good too.

"I really enjoyed looking back at it on the TV but more important were the three points.

"I feel better game by game and you will see that on the pitch. I am really happy to have scored for Stoke."