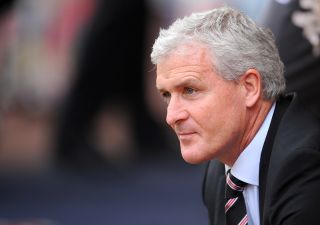 Hughes spent just a season at the London club, leading them to eighth in the Premier League before resigning, citing a lack of ambition as he reportedly lined up the Aston Villa job following Gerard Houllier's departure from Villa Park.

He did not get the Villa job, however, ultimately taking over at QPR in January 2012 and leading them to top-flight survival on the last day of the season.

The following season began disastrously at Loftus Road, however, and Hughes was sacked after a winless run of 12 games from the start of the term.

His return to management has been solid, with Stoke having won two and drawn one of their opening six league fixtures, and Hughes is hoping that will continue this weekend.

He said: "It will be nice to go back to Fulham. In hindsight maybe I made the wrong decision.

"When I was there I had a few doubts about one or two things, and maybe saw things differently to others.

"I questioned the way that the club wanted to move forward, but they have moved forwards so I was wrong.

"I had a great year there. We finished eighth in the Premier League, and I think that only on one other occasion have they finished higher than that.

"It was a successful year there, but I made the decision to leave, and like I say, in hindsight it was the wrong decision.

"I don't think I am going there with a point to prove. I am sure that most Fulham supporters will have looked at the job that I did there, and be very happy with it."

A reported training-ground bust-up between Kenwyne Jones and Stoke captain Ryan Shawcross has dominated headlines at the Britannia Stadium in the week.

Shawcross has already moved to deny that he and the Trinidadian engaged in an altercation and Hughes also strongly refuted the claims.

He added: "What was in the papers this week was pure fabrication. Why whoever wrote the story this week wanted to go down that route, I just don't know. Maybe they had an agenda, I'm not sure."