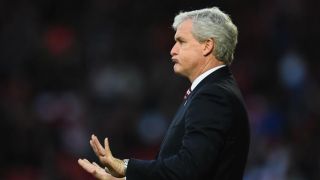 Stoke City manager Mark Hughes says his much-changed side rode their luck at times during Saturday's 2-1 win over Doncaster Rovers in the FA Cup.

Goals from Peter Crouch and Jonathan Walters either side of Nathan Tyson's first-half leveller were enough to take the Premier League side into the fourth round at the expense of their League One hosts.

Hughes made nine changes for the trip to the Keepmoat Stadium and saw his makeshift XI withstand intense late pressure from Darren Ferguson's side.

Reflecting on Stoke's progression, Hughes told reporters: "You always understand that in the last period of the game when you're the away side in the cup that the home side is going to have a go.

"I thought it was a good cup tie and I thought Doncaster played well. They caused us problems and it took two quality goals to take the tie away from them.

"We are thankful we are in the hat. We rode our luck with a couple of half chances Doncaster had at the end that could have fallen more kindly for them and they could still have been in the hat."

With Stoke in the running for FA Cup and League Cup success while sitting in the top half of the Premier League, Hughes was pleased to give some of his regulars a rest.

"We've had a big period and this is probably the only opportunity until mid-March where we will be able to rest key players who've taken on a lot of the workload," the Welshman added.

"We had nine full internationals out there, so it shows the strength in depth we have."