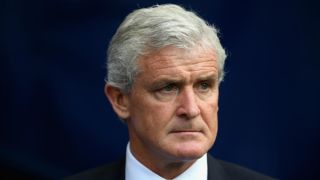 Mark Hughes is adamant that the 7-2 thrashing at the hands of Manchester City will not be a defining moment in Stoke City's season.

The former City boss had an unhappy return to his old club, seeing Stoke fall 3-0 behind inside half an hour to goals from Gabriel Jesus, Raheem Sterling and David Silva.

Although a Mame Biram Diouf strike and a Kyle Walker own goal either side of the interval sparked hope of an unlikely fightback, further goals from Jesus, Fernandinho, Leroy Sane and Bernardo Silva wrapped up a comprehensive victory that sent Pep Guardiola's men two points clear of rivals Manchester United at the top of the Premier League.

Stoke struggled to match City's intensity and could not cope with the hosts' superb movement, with Hughes accepting Stoke had little chance of recovering from such a poor start to the game in the face of a brilliant Kevin De Bruyne performance.

"I think it's important to understand that this result isn't going to define our season," Hughes said after Stoke slipped to 15th in the Premier League following a third loss from four away games this season.

"We have come up against an exceptional City side and been found wanting in terms of physicality and getting close to them.

"Kevin De Bruyne is head and shoulders above any player in the Premier League given how he can dictate the game. At 3-2, we got into a position where we might have got something out of the game, but if we are being honest it probably flattered us at 3-2.

"Players like De Bruyne see this situation and then just grab the initiative and say 'this isn't acceptable' and take the game away from you with the quality of their play.

Rookie right-back Tom Edwards had a difficult Premier League debut and had to be substituted due to injury following a testing performance, but Hughes defended the 18-year-old.

"We didn't have too many options," Hughes said, with Ryan Shawcross among the players unavailable due to injury.

"He's deserved his chance. If he hadn't got injured in pre-season he would have played before now. It's unfortunate for him and it's a learning experience for him and for everybody.

"Among a group that didn't acquit themselves too well today, I thought he did great."