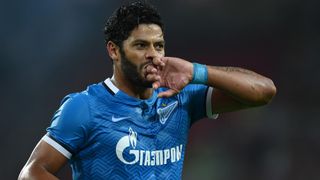 Zenit star Hulk has claimed he was the victim of racist abuse during his side's 2-2 Russian Premier League draw with Spartak Moscow on Saturday.

The 29-year-old was pictured blowing kisses in the direction of a section of home supporters towards the end of a heated clash at Otkrytiye Arena.

The Brazil international explained after the match that his gesture was in response to racism directed from supporters during the game.

"Unfortunately, the same things are happening - racism in the stands," he said. "I won't pay any attention to this, as I have already talked about this.

"Therefore, I will continue to blow kisses and answer them with the way I play on the pitch. These things don't even deserve to be discussed."

Ufa midfielder Emmanuel Frimpong accused Spartak supporters of racist abuse during a match in July, although the Russian Football Union did not pursue any further action over the incident.

Hulk scored a rasping free-kick in Saturday's draw after Ze Luis had given Spartak an early lead, before Artem Dzyuba netted a late equaliser for Andre Villas-Boas' side following an exquisite solo effort from Ivelin Popov.