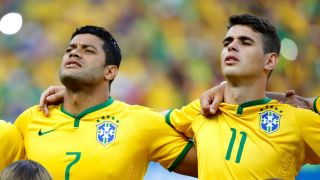 Shanghai SIPG star Hulk has claimed that he was the reason Oscar decided to quit Chelsea to move to the Chinese Super League.

The 25-year-old signed for Andre Villas-Boas' side after a bid of €60million was accepted by the Premier League leaders in December.

Oscar, who scored on his debut in a 2-1 friendly win over Al Batin, signed a contract that will reportedly see him earn €460,000 a week, but Hulk says it was his glowing praise of life in China that ultimately convinced his compatriot to move.

"I talked to Oscar about Shanghai SIPG before he made the move," he told assembled Chinese media in Doha. "I said to him that Shanghai is a beautiful city, the club is fantastic and we will get even better in the coming years.

"I also said our team-mates are very friendly and welcoming, which makes me feel pretty good. After hearing what I told him, he came."

Hulk was signed from Zenit in June for a reported €55.8m fee, which was a record for Asian football at the time.

But the Brazil international denied that price tags will put any extra pressure on himself, Oscar or fellow attacker Elkeson to perform.

"We have grown accustomed to playing under huge pressure, no matter how much the club has spent on players," said the 30-year-old. "Oscar, Elkeson and I are used to it. This is not a problem.

"Each new player is coming to help the team and I believe Oscar will help us a lot. The level of the team has improved a lot, obviously, and I think we will win the title next season."