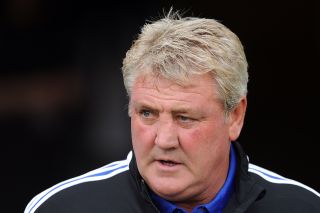 Hull sit eighth in the table after six games, having won three and drawn one of their fixtures so far, only slipping to defeats at title-chasing Chelsea and Manchester City.

Comparisons have been drawn between the current campaign and their first Premier League season under Phil Brown in 2008-09.

After a similarly promising start, Hull won just one of their last 22 games of the season, surviving with 35 points - the second lowest total in Premier League history.

Bruce is keen to keep the momentum going in order to avoid a similar slump this season.

"We have a made a wonderful start, but that's all it is," said Bruce.

"If someone had said to me we'd have 10 points from the first six games I wouldn't have thought that was possible to be honest.

"But the history of our club the last time we were here is that we did great until Christmas and the following 18 months after that must have been torture, agony.

"So we've had a good start - really good - but we've only played six games and there are 32 more to go."

Hull will take on Aston Villa at the KC Stadium on Saturday hoping to secure consecutive Premier League home victories for the first time in their history.

They will have to do so without influential winger Robbie Brady, who is set for a month on the sidelines after hernia surgery.

Brady has had a hand in five of Hull's six goals this season and Bruce is desperate for his key players to retain fitness after also losing captain Robert Koren and first-choice defender James Chester to a foot and ankle injury respectively.

"We've lost another one this week in Robbie, so we've played six and lost three to injury," said Bruce. "We need a bit more luck in that department.

"Robbie has been complaining of pain now for four, five, six weeks.

"It's been grumbling away at him and it got to a situation after last Saturday that it was too sore to train, so we thought 'let's get it done'."