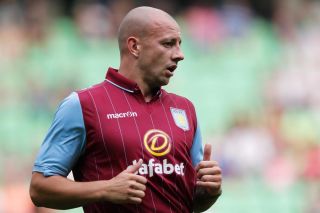 The Scotland international has endured a difficult time at Villa Park in recent seasons and, until the beginning of the new Premier League campaign, had not featured for the club since May 2012.

Hutton, who moved to the club in August 2011, was even told by manager Paul Lambert earlier this year that it was unlikely he would ever play for Villa again.

The 29-year-old spent time on loan at Nottingham Forest, Mallorca and Bolton Wanderers during his time in the wilderness, but now finds himself part of Lambert's plans once again.

Having initially been frozen out since his compatriot's arrival in the dugout, Hutton has played every minute of Villa's league matches so far.

And the Midlands club have taken many by surprise - sitting second after four fixtures having picked up a 1-0 win at Liverpool last time out.

Villa host Arsenal in the Premier League on Saturday.