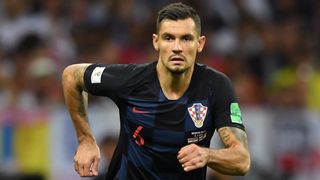 Dejan Lovren called for more recognition of his talents after he helped Croatia to a World Cup semi-final victory over England, describing himself as "one of the best defenders in the world".

The Liverpool centre-back played his part in keeping England striker Harry Kane quiet at Luzhniki Stadium as Zlatko Dalic's side bounced back from Kieran Trippier's fifth-minute opener to win 2-1 in extra time.

With a place in the final secured after a 2017-18 season in which Liverpool reached the Champions League final despite criticisms of their defensive weaknesses, Lovren feels a point had been proven about his quality as a player.

"I heard people saying I had a difficult season but I don't agree with that," the 29-year-old told BeIN SPORTS.

"I took Liverpool to the final of the Champions League and now with my national team we are in the [World Cup] final.

"I think people should recognise that I am one of the best defenders in the world and not just talk nonsense."

The Real Madrid star has captained Croatia to their first World Cup final, improving on the country's previous best performance at the tournament in 1998, when they finished third.

"It was quite tough first half, we couldn't control the ball and they had some chances, but in the second half we did much better. In extra time we showed that we are still able with the fatigue to play our game.

"Modric is not one of the best, [he is] the best midfield player in the world and if we win this World Cup he deserves the Ballon d'Or."