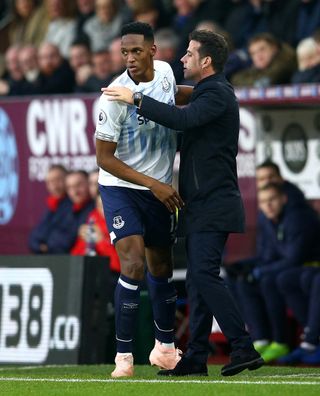 Yerry Mina has hailed the influence of Everton manager Marco Silva, labelling the Portuguese “Professor Marco” because of how much he has learned from the coach.

The Colombian centre-half joined Everton from Barcelona for a fee of around £27million 12 months ago and, after a patchy first season, he looks to have cemented himself at the heart of Silva’s back line.

Everton have not conceded in their last six fixtures at Goodison Park and Mina believes much of the credit is owed to Silva.

“I call him Professor Marco – he is very good for everybody here,” Mina said on Everton’s official website. “He is a really great coach and gives everybody a sense of confidence.

“He is very open to communication, you can talk freely with him, which is a very positive thing. I have had the good fortune to learn a lot from him in a short space of time.

“As defenders, we are working together and getting to know each other well – on and off the field. That creates a family feeling. I am lucky to have such good team-mates.

“The coach helps us all a lot and we always try to follow his instructions.”

Mina’s first year on Merseyside was blighted by a succession of injuries as Silva settled on Michael Keane and Kurt Zouma as his preferred centre-back pairing.

However, Zouma’s return to parent club Chelsea over the summer and Everton’s inability to sign another defender in the transfer window has pushed Mina to the forefront.

He said: “I started with the best intentions (after signing) but it didn’t turn out too well because of injuries.

“But they are behind me now and I am fully recovered. I am working very hard every day to do the best I can for the club.”

Everton are targeting a sixth straight victory at home, although they take on a Wolves side who prevailed at Goodison Park in the corresponding fixture last season.

Mina added: “We will approach the game with a great deal of focus. It is a rapid game when you play Wolves. They are a very intelligent team. It is important to keep our focus and maintain control throughout.”