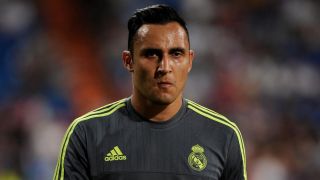 The Costa Rica international looked set to move to Old Trafford to replace De Gea, whose switch to Real was expected throughout the transfer window.

But the deal fell through on deadline day, leaving Navas at the Santiago Bernabeu and the Spaniard at United.

Navas said his emotions got the better of him at the end of the saga.

"I never wanted to leave Real Madrid. My agent told me to be alert to my phone," he told COPE.

"We had to go to Barajas [Airport], although I never actually got on a plane, I was in a waiting room.

"I thought that if God wanted me to leave Madrid, it would be for the best, but he didn't want me to and I'm still here.

"I cried that night when I found out I was staying, it was a build-up of emotions. I didn't want to leave, Madrid is my home."

Navas, 28, said he had not asked for a pay rise at Real – but admitted to signing a contract with United.

"I signed the Manchester United contract on a stretcher at Valdebebas, while I had my medical," he said.

"But I want to write my own story at this club and win everything this season.

"We have things to improve, but we're on the right path."