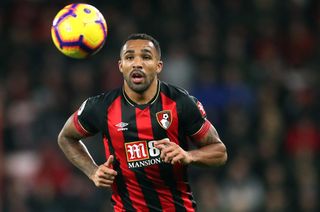 Wilson bounced back in style from a seven-week injury lay-off by chesting home the opening goal and laying on the game-clinching second for Ryan Fraser.

Southgate will announce his squad for next month’s Euro 2020 qualifiers on Wednesday and Wilson insisted the manager’s watching brief did not put him under any added pressure.

“No, it didn’t to be honest,” said Wilson, who looked razor sharp in his first game back following minor knee surgery in January.

“That’s the type of person I am. I can block it out and just focus on my performance on the pitch for Bournemouth.

“I know the manager knows what I’m capable of. He’s probably just come to see how I am after injury and thankfully (my performance) was a good one.”

Wilson scored on his England debut at Wembley in November in a 3-0 friendly win against the USA.

“For any player, when you’ve had a taste of it, you always want more and I’m no different,” he said.

“But I’m just back focusing on Bournemouth, making sure I get through the games unscathed and we got a positive result, which is nice.

Despite the 27-year-old’s latest injury setback, he agreed this season was the best of his career so far.

“It’s one where I’ve been fit for the longest, so I guess you could say that,” he said. “In terms of statistics as well, I’m scoring goals, getting assists and helping the team.”

Huddersfield’s latest defeat has left them 16 points from safety with eight games remaining.

Relegation after two seasons in the top flight appears inevitable and goalkeeper Jonas Lossl said their performance against Bournemouth was unacceptable.

After a long pause, Lossl said: “Can that be my reaction? This was not all right. I don’t think we showed enough passion to score, enough aggression.

“I feel a bit empty right now. I feel we really, really made a disappointing effort today.”

The Terriers never threatened to add to the paltry total of seven goals they have scored at home this season.

“We did play well in a lot of aspects and of course we tried, but we lacked aggression up front in the final third, not just from the strikers, but everybody, to score that goal,” Lossl said.

When asked what could be done to change their fortunes in the final third, the Denmark international added: “That is a big question, which we have worked on all season and we’re still working on it.”