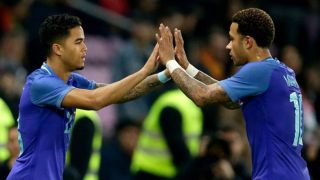 Justin Kluivert, the son of former Barcelona star Patrick Kluivert, hopes his family and the country are proud of him after he made his senior international debut for Netherlands.

The 18-year-old has followed in the footsteps of his father by impressing at a young age for Ajax and is already being linked with some of Europe's top clubs.

Kluivert Sr won the Eredivisie, Champions League and LaLiga in a career that took him to AC Milan and Barca, while he also earned 79 caps for the Oranje, scoring 40 goals to precede Klaas-Jan Huntelaar and Robin van Persie as the country's leading scorer.

It remains to be seen if Justin can live up to those lofty standards, but for now the teenager is thrilled to get his first taste of action on the big stage, having come on as a substitute late in the 3-0 friendly win over Portugal on Monday.

"Yes, it's all started now," he said after the match in Geneva.

"I'm really happy with my debut. This is a dream for me since I was a kid. I'm just 18 years old, at this age making my debut... yeah, that's amazing."

Goals from Memphis Depay, Ryan Babel and Virgil van Dijk earned Ronald Koeman his first win in charge at the expense of the European champions, affording Kluivert a smooth introduction to the international arena.

"A fantastic game to come on the pitch [into]," he said. "So I'm so happy with my debut, so happy!

"An amazing feeling... I felt jitters in my stomach. You know that everyone watched the game at home, full of suspense.

"So that's amazing and that gives me a fantastic feeling. I'm proud, I know my family is proud [too] and hopefully a part of Holland too.

"That's what you do it for and I hope to do it more in the future."

Netherlands failed to qualify for Euro 2016 and also missed out on a place at the World Cup in Russia this year, but Depay is optimistic about the team's prospects under Koeman.

"It's just the beginning of something new, with a new, young group of players," he said.

"We need to stay hungry and motivated to learn. And then you see the team's performance on the pitch.

"And outside the pitch we are close with each other and spend a lot of time. So we need to follow the path we just started."