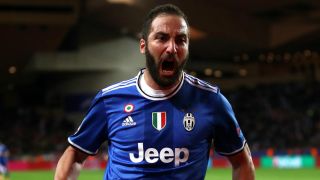 Juventus star Gonzalo Higuain says he fights so hard to ensure he can enjoy moments like his Champions League semi-final double against Monaco.

The striker scored twice as Juve recorded a 2-0 away win in the first leg on Wednesday, putting them in pole position for a place in next month's Cardiff final.

Higuain had been criticised for a record of only two goals in 24 Champions League knockout games coming into the contest, but insists he did not let that drought bother him as he hailed an impressive result.

"I fight so hard for these moments," he told reporters after the match.

"Goals were not coming for me in this competition but I knew I just had to stay calm and keep working hard.

"But I work for the team, the important thing was for Juventus to win and it would have been okay even if I had not scored."

Higuaín: "I fight so hard for these moments. I'm delighted with the goals but this isn't over yet." May 3, 2017

Higuain added: "I'm very happy, it was a very important game - a semi-final - and now we go back home with a great victory. We also wanted another clean sheet and we are thrilled with the result.

"I'm delighted with the goals but this isn't over yet - Monaco are a strong side."

7 - Gonzalo Higuaín has now ended a seven-game goalscoring drought in the CL knockout-out phases. Relief. May 3, 2017

The second leg takes place in Turin next Tuesday, with Higuain's former club Real Madrid the likely opponents for the winners in the final after they defeated Atletico Madrid 3-0 in the first leg of the other semi-final.