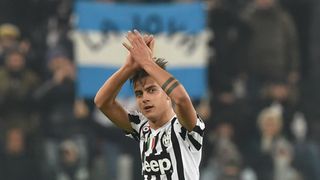 In-form Paulo Dybala has hinted he would like to play with Lionel Messi after a Barcelona representative was in the stands to watch the Juventus striker net the only goal in Sunday's win over Roma.

Dybala's clinical finish with 13 minutes remaining settled the clash at Juventus Stadium, as the Argentinian made it eight goals in his last 10 Serie A appearances.

The 22-year-old has shone since joining from Palermo in the off-season, with Barca sporting director Robert Fernandez there in person to see the game at the weekend.

"To tell the truth, I did not know there were people of Barcelona in the stands," Dybala said in quotes reported by Sport.

"It makes me happy that things are going well for me and the team and we are going to show that we are able to give more in the future."

Dybala has three caps for his country, although he is yet to feature alongside superstar Messi.

When asked by reporters if he would like to come up against his compatriot, Dybala replied: "No, I have a desire to play with Messi."