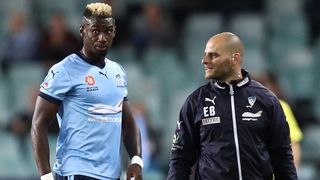 Melbourne Victory have been given an early boost with news pacy Sydney FC attacker Bernie Ibini is out of Sunday's A-League Grand Final.

"Bernie's out," Arnold said. "He obviously tried his best to be ready for tomorrow.

"But the hamstring is always tough with a short turnaround. Sad for the kid but we have plenty of depth in the squad.

"We've got some other good options to come in off the bench."

Arnold has used Ibini to come on for attacker Filip Holosko midway through the second half.

The injury could open the door for David Carney to play more of a role off the bench on Sunday.