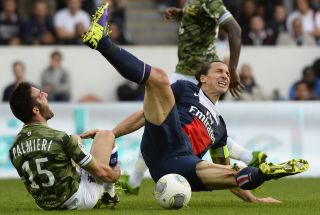 The star Swede netted a brace, including a stunning mid-air back-heel, as PSG moved three points clear atop Ligue 1 on Saturday.

Edinson Cavani started on the bench and came on for Ibrahimovic at half-time, scoring a second-half brace.

Maxwell was used late in the encounter and Ezequiel Lavezzi was left on the bench having come back from South America after the international break.

Ibrahimovic was delighted PSG performed so well with so many good players left out of the starting line-up.

"There are many games coming now so we have to be in shape and continue the rhythm that we have been doing so before the national break we won and today we did good also," he said.

"I think it was a good game, we win the game and controlled the game good with many players missing.

"Like I said before, the first game after the national team is always difficult but we did good, very good."

Brazilian Lucas Moura was similarly pleased but said he was eager to get back on the scoresheet having not scored since September 13.

"This is the perfect result for us before a vital Champions League match. The win brings even more motivation and now we can carry that forward," he said.

"I am a bit anxious to score. Maybe that's why it is not happening.

"But I am working hard, the most important thing is the team winning and at some point I will score too."