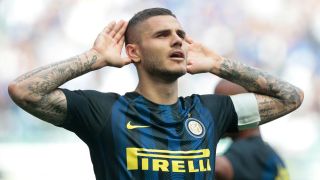 Mauro Icardi has been called up by Argentina for the first time since 2013, with the Inter striker taking Sergio Aguero's place in the squad.

Argentina face Brazil on June 9 and Singapore on June 13 and have been without a coach since the April 11 sacking of Edgardo Bauza, although Jorge Sampaoli is expected to be appointed.

The Argentine Football Association (AFA) has indicated he is their first choice and Sampaoli said on Friday he could not turn down his "dream" job, but he will take charge of Sevilla's final LaLiga game of the season against Osasuna on Saturday.

There is no place for Aguero's Manchester City colleague Pablo Zabaleta, although team-mate Nicolas Otamendi is included, with Ezequiel Lavezzi, Lucas Pratto and Angel Correa among the other notable absentees.

Overseas footballers included in the squad have been confirmed by the AFA, but local-based players are due to be added later.