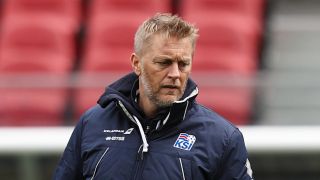 Iceland missed the chance to go to the World Cup with a much-needed victory after Ghana came from two goals behind to earn a 2-2 draw on Thursday.

Heimir Hallgrimsson's men – who had lost their previous three friendlies - made a strong start in Reykjavik, Kari Arnason and Alfred Finnbogason scoring to earn a 2-0 first-half lead for the hosts.

There was nothing Ghana could do about Iceland's sixth-minute opener as Arnason headed home a corner from Burnley winger Johann Gudmundsson.

And when Iceland added a second in the 40th minute, Ghana goalkeeper Lawrence Ati fumbling for Finnbogason to nod in from close range, a comfortable win appeared likely.

Arnason almost had a brace as he again eluded his marker, but this time the free header was sent straight at Ati, Ghana then setting up an exciting finish when Kasim Nuhu thumped home from a set-piece.