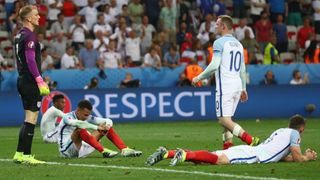 Eidur Gudjohnsen says Iceland were told they were facing "the most overrated national team" before their Euro 2016 upset over England.

Former Chelsea and Barcelona star Gudjohnsen was part of the squad that knocked England out of the last-16 stage in France, which led to the swift resignation of manager Roy Hodgson.

The veteran, who can play up front or in midfield, believes that Iceland were rewarded for a stronger team ethic than England, and says the Three Lions have failed to live up to the lofty expectations they often face at major tournaments.

"I think we had already achieved something by qualifying from the group stage and that took pressure off us, no one expected us to qualify from the group," he told BBC Sport.

"We had belief. English football always had a big influence on Icelandic football, so we were playing against players we probably watched on a Saturday.

"But this is something [then Iceland boss] Lars Lagerback pointed out, that in recent years we playing against the most overrated national team side.

"It got us thinking, looking back it is true. Expectations are always so high, there is so much pressure for England to do well in major championships and they haven't managed to do that.

"We went into the match confident. I don't think we can say we outplayed England, but we were more resilient, had more character and showed a greater togetherness as a team that's what got us where we ended up."

Sam Allardyce replaced Hodgson at the helm, but lasted just one match – a 1-0 World Cup qualifying win over Slovakia – before leaving the role in the wake of a Daily Telegraph sting in which he was filmed allegedly making damaging claims about third-party ownership to undercover reporters.