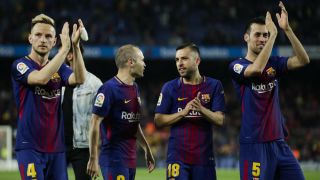 Ivan Rakitic lauded Barcelona team-mate Andres Iniesta ahead of his impending departure, saying anyone who does not like him as a player has "made a mistake".

Iniesta signed what was described as a 'lifetime' contract with Barcelona in October, but the deal reportedly included a get-out clause, allowing him to leave at the end of the season.

He announced his intention to depart in April and for several weeks there were strong reports suggesting he was set to join Chongqing Lifan, only for the Chinese Super League side to release a statement distancing themselves from such claims on Monday.

Japanese club Vissel Kobe then emerged as a potential destination, but they too dismissed the speculation, insisting Iniesta was "not realistic" for them.

But wherever he ends up, Rakitic acknowledged Barca are losing a fine player and one who embodies football.

Rakitic's own future has come into question at times this season, with the Croatian said to be one of the few players in Barca's first team that the club think they could improve on, despite enjoying a solid campaign.

For Rakitic, former club Sevilla stands out as a potential destination, the player having enjoyed three years in the Andalusian capital before his 2014 move to Camp Nou.

"For me it would be a dream to be able to play again with Sevilla's shirt in the Ramon Sanchez Pizjuan," the 30-year-old said.