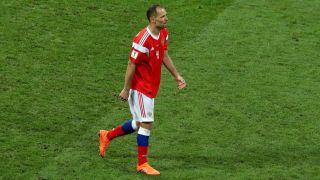 The 38-year-old defender returned to the national team for the finals and played a key part in his side's surprise run to the last eight.

Ignashevich played in all five of Russia's matches and scored in their two penalty shoot-outs in the knockout phase, including on Saturday in Sochi, where Croatia triumphed 4-3 after a 2-2 draw.

The CSKA Moscow centre-back, who won a record 127 caps for his country, says the moment is right to call time on his career.

"There's an endless stream of messages on WhatsApp and Instagram and no way to tell everyone, 'Thank you for the kind words'," he wrote on his official Instagram page.

"I couldn't imagine that I would finish my football career on such a high note!

"I'm happy I was part of this team, with this coach, and of our country's football for nearly 20 years."

Ignashevich, who turns 39 next Saturday, won 17 domestic trophies with CSKA in a 15-year spell at the club. He also captained the side to their UEFA Cup triumph in 2005.