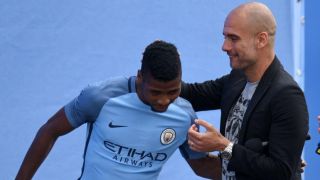 Manchester City are adapting to "a different way of training" under Pep Guardiola, according to teenage striker Kelechi Iheanacho.

Former Barcelona and Bayern Munich boss Guardiola has taken up the reins at the Etihad Stadium, with League Cup holders City aiming to bounce back from a disappointing fourth-place finish in the Premier League last time around.

Nigeria international Iheanacho was one of the success stories of City's final campaign under Manuel Pellegrini, with 12 goals in all competitions, and he is now getting to grips with Guardiola's famed style ahead of Wednesday's opening pre-season friendly against Bayern.

"Guardiola is a good manager, everyone knows that," Iheanacho told Sky Sports.

"He's bringing fresh thoughts and his own style. Everything is different and everyone is adapting to what he's teaching us.

"We need to understand what he's telling us and what he wants to bring to the team."

The 19-year-old retains a healthy respect for Pellegrini, feeling indebted to the Chilean for being allowed to make a first-team breakthrough among a squad packed with big-money signings.

"He gave me that chance to play in the first team and to come and show what I can do," he explained. "I will always be grateful to him, anywhere he is and anywhere he goes.

"I wish him good luck and I pray that he gets a good offer anywhere he goes. He is a great manager and he will continue to be great.

"Last season was great for me and there were some good highlights. Scoring my [first] goal against Crystal Palace and playing against Real Madrid in the Bernabeu, those were good feelings."

Iheanacho's clinical finishing ability has him marked out as a natural striker but he insists he is capable of filling a number of roles across the forward line  - a quality that should be well-suited to Guardiola's fluid brand of attacking football.

"I can even play on the wing as well. I can play in any position."