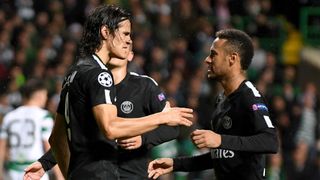 Unai Emery is to put his foot down following the recent penalty spat between Paris Saint-Germain stars Edinson Cavani and Neymar, revealing one will be the designated taker and the other will be back-up.

PSG beat Lyon 2-0 at home thanks to two late own goals, but the result was overshadowed by the pair quarrelling over who was to take a 79th-minute penalty.

Cavani ultimately took the spot-kick and failed to convert, with Emery commenting after the game he was happy to let the pair sort it out between themselves.

But now the PSG coach is going to tell them who is the first-choice taker and who will be back-up.

"There are two players able to take penalty kicks; Cavani and Neymar," Emery said. "There will be, from now, the first shooter and the second one.

"I will let them know who is going to be the first one and who will be the second one. But there is also a responsibility level.

"It's not the same thing when you're winning 3-0 and when the score is 0-0. I didn't only talk to Cavani and Neymar, but the whole group about the penalty thing."

All is not lost in terms of unity at PSG, however, as Emery applauded defender Dani Alves for organising a dinner with the entire team on Wednesday.

"I think it's a great idea," the Spaniard added. "I'm very happy he did that.

"It's very important for the players to have lunch or dinner all together because they can talk to each other outside the training session. I love this state of mind."

There was also good news on the injury front for Emery, who confirmed Angel Di Maria is training again following a thigh injury, while Marco Verratti can expect to be involved in Saturday's trip to Montpellier after serving a three-match ban.