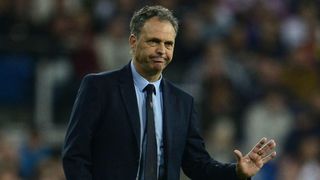 Joaquin Caparros says he feels ready to succeed Vicente del Bosque as the head coach of Spain, despite spending 18 months without a job.

The 60-year-old has emerged as a surprise favourite to take over after Del Bosque stepped down following the Euro 2016 exit to Italy last month.

Caparros has enjoyed a nomadic coaching career, working his way through the lower tiers before enjoying a five-year spell with Sevilla and a four-year stint in charge of Athletic Bilbao.

He has not found a new role since being sacked by Granada in January 2015, but insists his longevity in Spain's top flight shows he is a prime candidate to take the reins of the national team.

"I'm capable. I have almost 500 matches in the Primera [Division] and I can boast of having coached in all categories of Spanish football," he said, speaking at the EFE Forum.

"Any coach from our football is qualified, thanks to the training they give you in our schools, and then the hunger that you have to grow, learn and innovate.

"The model of the national team is already defined. It can't be changed. We won with it, and it's a global example. Success is about making the most of the qualities of the players."

Spain's defence of their European Championship crown ended in disappointment despite an encouraging start, with a 2-1 defeat to Croatia in their final group game followed by a 2-0 loss at the hands of Italy in the round of 16.

Caparros, however, believes Del Bosque's side produced the best standard of football in France and pointed out a number of the tournament's star players are based in LaLiga.

"There was no better team than Spain," he said. "The best football came from us, Germany and Croatia. But the mistakes were costly.

"We saw physical, direct players, but not all that talented. Most of the enjoyable ones were ours: the players of Spain, Cristiano [Ronaldo], [Antoine] Griezmann, [Gareth] Bale, [Toni] Kroos..."