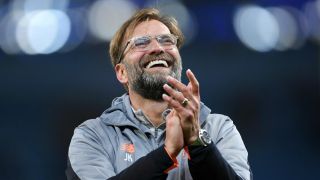 Jurgen Klopp praised Liverpool's players for a "nearly perfect season" after they secured a second successive top-four finish in the Premier League.

A routine 4-0 victory over Brighton and Hove Albion on Sunday made sure of the final qualification spot for next season's Champions League, albeit nearest rivals Chelsea ended up losing 3-0 away at Newcastle United anyway.

Mohamed Salah scored the opener at Anfield, taking his tally for the league campaign to 32 goals, a new record for the competition in a 38-game season, as the hosts cruised to victory.

After Dejan Lovren doubled Liverpool's lead with a powerful header before the break, Dominic Solanke and Andy Robertson grabbed their maiden goals for the club in the second half.

"What the boys did this season was unbelievable," Klopp told Sky Sports while taking in a lap of honour after the game.

"I'm really proud of the boys, a nearly perfect season. We had no chance to challenge Manchester City, so the only thing you can go for is a Champions League spot. It is a big thing.

"We had a few more chances today, it's fantastic that Mohamed Salah could break the record and Dominic [Solanke] and Robbo [Andy Robertson] could score.

"It's hard to be a young player in this fantastic side, Solanke has struggled a bit but he has shown up today. I'm really happy for him."

Klopp still has one game to go this season - the small matter of a Champions League final against Real Madrid on May 26 - but is already looking ahead to next term.

The former Borussia Dortmund boss confirmed he intends to add to his squad in the next transfer window, yet insisted there would be no major overhaul on Merseyside as they attempt to make up ground on runaway champions Manchester City.

"Congratulations to Manchester City, it is incredible to get 100 points," Klopp added.

"We need more consistency to challenge, with a little bit more luck with injuries I think we would have been a little bit closer. But we have got a lot of experience from this season.

"We have matured and we will do that again. In our good moments it is not easy to play better football.

"We will add to the squad, we need more players but I'm a big believer in developing the team. These boys made a big step."

17 - Mo Salah has scored against 17 different Premier League opponents this season; no player has ever scored against more in a single campaign in the competition. Variety. May 13, 2018