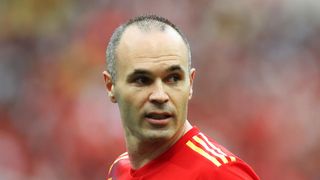 Andres Iniesta says he spent "many months" thinking about his international future being opting to quit Spain duty after the World Cup.

Iniesta confirmed his international retirement after Spain's shock last-16 exit at the hands of hosts Russia on penalties.

The former Barcelona captain, 34, will now turn his focus to the next chapter in his career at Japanese club Vissel Kobe.

And in a lengthy social media post on Tuesday, Iniesta explained how he came to the decision to stop playing for Spain.

"Hello everyone," wrote 2010 World Cup winner Iniesta. "Fourteen years ago, I put on the shirt of our national team for the first time, I was 15 years old and I'll never forget that moment. It was a lifelong dream to be able to defend the colours of my country.

"It's something very special, not just a dream, but also a great responsibility. Throughout all these years I've tried to be conscious of what that means and to give the maximum to make you all proud.

"I believe I've been lucky to be able to live one of the best eras of Spanish football, with a generation of players who have been and are exceptional in every sense. We've achieved great success, things that we all dreamed of when we were small, but also we've had great disappointments and we've lived very difficult moments.

"To everyone, thank you very much for making me a better team-mate and better footballer. I've been proud to be able to share all these years with you.

"Now is the moment to take a step to the side. It's not been an easy decision, on the contrary, I spent many months thinking about it. The excitement to continue is total, but I've always said that I would finish doing the best for the national team.

"The future is thrilling, with a group of players who are amazing and who will have me as a fan from now on, supporting them unconditionally. I don't have any doubt that what's coming will be fantastic and that they'll reap great success. The group has to be excited."

Iniesta wrapped up his farewell by thanking the Royal Spanish Football Federation (RFEF) and some of the most important people who have guided his career.

"I'd like to give thanks to everyone at the federation for the support and treatment I've always been given during these last 19 years; to all the presidents, directors, and employees with whom I've been able to live all these years," Iniesta continued.

"I've had the fortune of having great coaches throughout this era, with special affection for Luis Aragones, who gave me my debut, and with whom we won the first Euros in a dream-like tournament.

"To all of them, thank you for counting on me, for your confidence and for changing the feeling of Spanish football: Luis, Vicente [Del Bosque], Julen [Lopetegui], Fernando [Hierro] and also Juan Santisteban, Inaki Saez, [Jose] Ufarte and Gines [Melendez].

"To all of you, the fans, thank you, thank you so much for your support and affection. Always with La Roja! Finally, I'd like to especially thank my family: thank you for your unconditional support and for always being at my side. We chased a dream and we realised it.

They say a picture is worth a thousand words.We've picked 35 photos to sum up 's career, to thank him. Those would be 35,000 words... And do you know what? It's still not enough because Andrés is exceptional.IrreplaceableETERNAL July 3, 2018