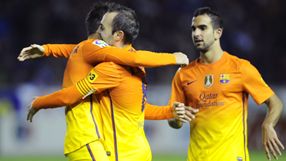 The Spain playmaker, who struck the winning goal in the 2010 World Cup final, had limited space on the edge of the area when he curled a delicate shot into the top corner to double Barca's lead after 50 minutes.

Alaves reached the final of the UEFA Cup in 2001 and now play their football in the third tier of Spanish football but battled hard against a Barca side who were without the rested Lionel Messi.

They faded, however, after Iniesta fed David Villa to slam a shot in off the crossbar just before half-time.

Alaves have a mountain to climb if they are to come back in next month's second leg at the Nou Camp, particularly after Cesc Fabregas headed a third for the unbeaten La Liga leaders at the end.

Earlier, Valencia ran out 2-0 winners over another Segunda B side Llagostera thanks to a brace of set-piece goals on a rain-lashed artificial pitch.

The visitors struggled until Jonas nodded the opener after a well-worked free-kick just before the break. Nelson Valdez headed the second from a corner.

The hosts had the chance to give themselves a lifeline for the return leg at the Mestalla with a penalty near the end but Marc Sellares fired his spot-kick against the post.

The second legs are scheduled for November 28.

Real Madrid visit Alcoyano on Wednesday when La Liga co-leaders Atletico Madrid are away to Jaen.