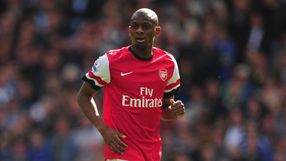 Wenger was speaking ahead of his team's Champions League Group B match against Olympiakos at Emirates Stadium on Wednesday.

"Diaby is out for three weeks with a thigh injury," Wenger told a news conference. "[Mikel] Arteta to have test tomorrow."

The injury-prone Diaby had to be substituted early in the Premier League match against Chelsea on Saturday which Arsenal lost 2-1, their first defeat of the season.

Better news for Wenger was that 20-year-old midfielder Jack Wilshere played an under-21 game on Monday, his first competitive appearance after missing 14 months through injury.

"You always have to make that first step, and he has done that today and that is fantastic," reserve team coach Terry Burton told Arsenal's website.

"He is a quality player, it is great for the club that he has taken that first step on the road towards getting back into the first team."