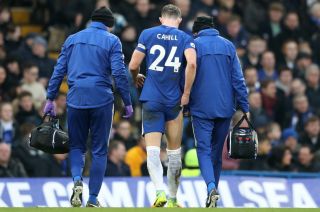 Football’s hamstring epidemic
Hamstring injuries are the most common muscle injury in professional football and account for 12% of all injuries. On average each club loses players for 90 days per season (16 matches) as a result of hamstring injuries. That’s a lot of money to be paying for players to be sitting on the treatment table.

Despite an improvement in injury prevention strategies and our understanding of how and why they occur, players remain susceptible.  Here, we look at why these injuries occur and how they will be classified and graded, so you know how to prevent them and spend more time on the pitch.

How do the hamstrings work during a game?
They are responsible for bending the knee and extending the hip. Both functions are performed simultaneously when a player is running and significant strain is placed on the muscle group with each stride, increasing the risk of injury.

Are fast players more at risk of hamstring injuries?
People often think that only quick players can get a hamstring strain (tears) - but this is not strictly true. Quicker players generate more force and speed, which creates a high load in the muscle fibres, and increases the risk of them tearing – but it can happen to anyone.

What happens when the muscle tears?
The injury normally occurs in the muscle on the outside of the thigh called the biceps femoris. It can also be caused at slow speeds when excessive mechanical stress is placed on the muscle leading to a tear. This often involves the tendon and is more common in the semimembranosus muscle.

How do you know you have suffered a hamstring injury?
A player will feel a sharp sudden pain in the back of the thigh and a loss of relative power. Depending on the severity of the injury, they will often have pain when they bend their knee (either with or without resistance) and pain on straight leg raise (hamstring stretch).

How is a hamstring injury classified?
If a player can get a scan this may reveal some bleeding and swelling in the area. Depending on the size of the tear the radiologist may be able to see some fibre damage and will report on the extent of this. Until recently tears were very simply classified into three categories:

Grade 1 – Mild muscle strain. Some fibres are damaged. Patient is generally able to walk reasonably comfortably. Swelling may be present but not easily seen.

Grade 2 – Moderate muscle strain. Muscle or tendon is overstretched with more of the fibres damaged approximately 50%. More pain on function, which will limit movement and be painful to touch. Some bruising may be present.

However, this grading system is outdated and had too much variation in range on reporting.  It has now been replaced by the British Athletics Muscle Injury Classification. This is based on MRI results and splits the injury into five grades (0-4) and 3 sub-sections (a-c) depending on the site of injury. This provides the player and physiotherapist with far more information as to how long the injury will take to recover and the type of exercises that will help it to heal.

How long will a hamstring injury keep you out for?
The time it takes to recover from a hamstring tear can vary widely depending on the site of the injury. A small myofascial tear on the outside of the muscle, may recover in 10 days to two weeks. Mid-muscle belly or musculo-tendinous junction tears (most common) will take approximately four weeks to heal. Tears involving the tendon take longer - often more than two months - due to people trying to load them too early as symptoms are often only muscle weakness.

What factors increase the risk of a hamstring injury?
Without doubt the biggest risk factor is previous injury. This generally leaves an area of tissue that is not quite as strong as the previously healthy tissue and therefore places increased stress on either that site of the other muscles around. Other things that will increase risk are:
•    Lack of warm-up
•    Muscle weakness or muscle imbalance
•    Poor biomechanics
•    Spinal physiology including altered neural tension
•    Ethnicity
•    Age
•    Poor flexibility
•    Fatigue
•    Mechanical stress (slow stretch) – overstretching, slide tackles, high kicks etc

How to prevent and recover from hamstring injuries

PRICE
From the initial point of injury, it is important to apply the PRICE (protection, rest, ice, compression, elevation) principle in the early stages. After that focus on regaining range of movement and subsequently strength followed by speed.

If we consider the common mechanism that hamstrings tear, it is important to increase our strength and load capacity in these positions. This involves eccentric training of the hamstrings in a lengthened position.

Return to the pitch
When your range and strength is good you can then gradually return to running, ensuring that you have reached maximal speed prior to returning to training or match play. Failure to have sufficient strength or speed capacity will significantly increase the risk of being re-injured.

When there is a greater involvement of the tendon it is important to develop tendon-loading capacity through increasing time under tension. These injuries will always take slightly longer than mid-muscle belly tears. A simple way of doing this is performing isometric (static) holds in a bridge position for up to 2 minutes at a time. Start for small periods and extend the time as you get stronger.

It is important to note that rehab should not just focus on the hamstrings alone. There is strong evidence to show that trunk stability and functional exercises help to reduce the risk of further injury also.